The AREMA Annual Conference is an important event to attend as it provides several days of committee meetings, technical sessions, keynote addresses and a myriad of breakout sessions to further industry knowledge. Our Sessions include topics related to Structures, Passenger & Transit, Track, Engineering Services, Communications & Signals and Maintenance-of-Way.

IPA will showcase several of our rail products plus a sneak-peek at what we have in development! Plan a visit with us today!

IPA is celebrating 30 years in business! Join us at our facility for this can’t-miss event, August 24, 2018, 1pm – 6pm. Jointly celebrating our 30 years and the honoring of our founder, Ilia Petkov, who is retiring! Live music, food, activities, product demonstrations and facility tours will highlight an afternoon of celebration! Please RSVP! 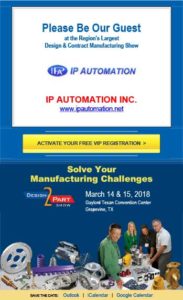 Finally, IPA will exhibit at the Design-2-Part show, Booth #516.  Come and check out some of our newest production parts.  In addition, take in the breadth of what we can make for you.  Most of all our water jet and laser cutting expert will be on hand to discuss your projects!  Be our guest and Click here to activate your free vip registration…> 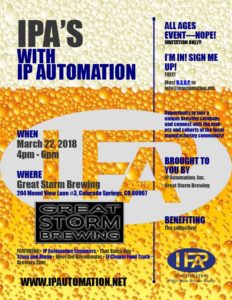 Join us for our first ever IPA’s with IPA – Great Storm Brewing pdf…>.  Sign up for the event series! And sample some of the most noteworthy craft brewers in the state.  Therefore, smiles, stories and reservations are required!

An article by Ken Krassy, Director of business development at IP Automation Inc., appears in the October 6, 2017 edition of The Colorado Springs Business Journal.

Ken serves on the board of directors of CAMA South and chairman of its workforce committee.

We are proud to announce that IP Automation has recently been nominated in the category of “Materials – use of new or transformational materials” at the Colorado Manufacturing Awards 2017. The awards ceremony is Thursday, April 13 from 5 – 8 at The Art Hotel. Click here for award ceremony details…

IP Automation’s innovation for being considered for the award comes from its motto, “Where Ideas Become Reality” as shown in the following…

Ilia Petkov, founder of IP Automation, Inc. was challenged by a customer to solve a problem in the production of part of an aircraft braking system that incorporated a graphite component that had a tendency to crack or break during transportation or production.

The challenge was accepted and Mr. Petkov looked into ways to re-purpose previously scrapped carbon parts by the customer and use the resulting “new” material in the production cycle as an alternative to the unreliable graphite.

The “transformed materials” used in the manufacturing cycle evolved from Mr. Petkov’s vision of how to re-purpose hardened carbon brake components that had to be scrapped after a predetermined number of aircraft landings. He then developed a way to re-cycle the scrap by re-designing and creating a new production component from the carbon material for the customer to use in its production facility.

It is estimated that his contribution to this change in the manufacturing process for the customer has saved the airline industry hundreds of millions of dollars by transforming the previously scrapped material”.

This innovative process began over ten years ago and is still in full production and growing.

Moving forward, please visit our booth at the upcoming show:

First of all, I am happy to announce a new addition to the IPA team, Ron Hackbarth, as our Production Manager. Ron brings his management and organization skills to our company developed during his extensive career at NASA. Welcome Ron.

IPA has now become a member of CAMA (Colorado Advanced Manufacturing Alliance). Our previous local manufacturer’s group, PPMP (Pike’s Peak Manufacturers Partnership), is now CAMA South. As a result of joining CAMA, our Director of Business Development was asked to be a presenter at a breakout session at CAMA’s annual conference. We have received inquiries regarding production and design opportunities as a result of participating in this event as a speaker.

In August, we attended a national railroad conference and exposition in Orlando, Florida, where we introduced a “maintenance of the way” unique to the railroad industry. It is called the HYDRA where one machine can use multiple heads for installing and removing clips that hold the rails to the cross ties. Major railroad engineers from BNSF, Union Pacific and others, were impressed and expressed further interest in the machine.

As we approach the end of 2016, beyond our daily recurring business, which has shown a marked increase, we have found ourselves involved in unique projects such as …

Moving forward, we look forward to 2017 and continuing to build on the business momentum we have experienced as 2016 comes to a close.

Why is CNC machining the best fabrication method?

CNC machining means “computer numerical control” machining. In short, CNC technology digitizes the movement of machines. Not only are CNC machines entirely computer programmable, but they also store each program in the computer memory. As a result, future replication and editing is faster and more accurate than ever.

After the engineer programs the machine, the CNC machine can replicate virtually any quantity of products on command. In turn, the engineer loads the materials and oversees the finished product. In addition to providing precise fabrication, digital machining allows engineers to easily adapt the program as needed.

IP Automation takes pride in offering the best CNC machining services in Colorado Springs. First and foremost, our engineers ensure quality and accuracy in every project. Because our fabrication services are all in–house, our engineering team directly oversees production.

IP Automation’s CNC machines are incredibly efficient and versatile. Our powerful, accurate, state–of–the–art machines are at the cutting edge of technology. The following are just a few highlights of our CNC machining capabilities at IP Automation:

Our engineers are highly experienced in programming CNC machines, utilizing the latest CAM software. For both short run as well as high volume projects, we will complete your order with 100% accuracy.

IP Automation is celebrating 30 Years in Business! This joint ceremony not only celebrates our 30 years in business; it also honors our founder Ilia Petkov, who is retiring after 30 years!